Four and a Dog

A blog about family life

I resigned myself long ago to the fact that during toilet breaks I would most likely be joined by Diva, Bruiser and Uncle M. I’m not sure how I feel about having to continue my role as Captain Hook at the same time.

The problem with holidays is that eventually you have to come home. Nobody seems too impressed by this. Having spent three glorious weeks in France with access to a swimming pool, a beach, a play house and grandparents, Diva is particularly unimpressed with her lot.

Even Bruiser seems to be annoyed with me- probably because his diet of pine needles and apricots has come to an end.

Thankfully we had some distractions over the weekend, but today I was on my own, the first time in over three weeks. I had completely forgotten what it’s like to try and keep my children entertained for an entire day.

We were up and dressed by 7am and playing Peter Pan by 7.30am.

This game has continued ALL DAY. We went out on a long walk during which I had to swap between being Wendy and Cap’n ‘Ook. Several other members of the general public were randomly assigned pirate names and then were unknowingly made to walk the plank or chased back to their pirate ship. Bruiser had the pleasure of being Michael most of the day and I am genuinely convinced he now thinks this is his name.

We have been to a playground, done some colouring, played in the garden, hung out washing, made food together, watched TV, read some stories, walked for two miles and put all the toys to bed one at a time. It’s only day one! There is an entire summer ahead of us that I am going to need to fill. I clearly need to raise my game.

Who wants to help me make a pirate ship?

Bruiser is a cruiser! The name, Bruised, may now be more appropriate.

He’s been pulling himself up on the sofa for a few weeks, but has decided to further advance his skills by pulling himself up on everything; trying to support himself with one hand whilst reaching for something he shouldn’t eat; shuffling sideways in order to reach something he really shouldn’t touch (often electrical); and occasionally balancing just enough to stand unsupported for three seconds at a time.

This is all wonderful, but exhausting.

Unfortunately Bruiser has chosen to make these advancements whilst visiting the south of France- a place not known for it’s cushioned floors. Making your first attempts at standing and walking in a land full of rocks and tiled flooring is never going to end well.

Thankfully we have a cushioned playpen that he will at least tolerate for a few minutes. Diva calls it the dunge(r)on. She regularly helps him inside and shuts the door- such a kind big sister.

Cruising is not Bruiser’s only new skill. I think there must be something about babies being out of their normal environment that results in them suddenly developing new skills. When Diva was a baby she was exactly the same. This week Bruiser has learnt to say, ‘ta (thank you)’, whenever you hand him something, or he hands something to you. He regularly claps with great enthusiasm, and is especially pleased when this elicits a round of applause from everyone else. He also randomly waves his arms and squeals like a teenage girl meeting her friends in a shopping mall (I’m hoping he hasn’t learnt that one from me).

I’ve always loved the beach. I especially love swimming in a warm sea and building sandcastles. Diva also loves these things. She equally likes getting to eat ice-cream as it rapidly melts over her face and hands.

Bruiser loves kicking his feet in the sand and filling his chubby fists with sticky, wet sand. He also likes ramming big fistfuls of sand in to his mouth before anyone can stop him.

I do not like changing nappies full of sandy poos.

If ever you find yourselves in Provence with children under the age of ten, or you just fancy going somewhere fabulously bizarre, take yourselves to Le Village des Automates. Here you will find an entire park of moving characters, dancing to an eclectic mix of music, alongside a superb array of adventure playground equipment.

The playground equipment really is in very good condition and includes zip wires, climbing frames, slides, tunnels, ball pit etc. There is also a lovely shaded cafe next to a child sized train that can be ridden for 1 euro. Everything else in the park is deliciously run down with some of the older exhibits housing puppets whose hands now lie decaying on the floor. Much like The Small World Ride in Disney, there are also some fantastic displays of racial stereotyping. All you need do is press a button to watch racially inappropriate puppets dance to strange songs that explain stories about pandas that eat too much bamboo…or something…my French isn’t great. Also, like Disney, there are some interesting liberties taken with traditional stories. Gulliver lounges in the forest whilst being fed by the seven dwarves and Pinocchio meets some unusual characters including a couple of people with dog faces… or maybe they were dogs with human hands…

There were also a couple of displays that I doubt Disney, even on his darkest day, would have thought to include in a Small World. My favourite was a set of elves/gnomes extracting another elf/gnome’s tooth with a piece of string. They all look very happy about the whole thing, even though they are stood next to a bucket of cotton wool stained with, what I hope is, fake blood. If that isn’t enough, there’s also an equally jolly set of elves/gnomes elbow deep in a surgical procedure.

I am not telling you any of this to put you off- far from it! I think this place is perfect for the whole family. Diva and Bruiser absolutely loved it! Bruiser’s favourite was a large furry dragon in Santa’s castle (you remember Santa’s castle right? It’s next to a four legged ant riding the Loch Ness Monster) and Diva pretty much loved it all. She travelled around the park in a Little Tikes car in which the owners had considerately added a floor for her feet and a handle for Grandad and Daddy to push with. She got to eat ice cream and run in a motion activated fountain. My Diva daughter, who regularly declares, “I can’t”, whenever she is faced with any kind of climbing (including stairs), climbed ropes, whizzed around on zip wires and scrambled through tunnels. The adults got to laugh, a lot, eat ice cream and enjoy the enjoyment of the children.

Diva has thanked me for her “adventure” every day and can not wait to go back. For those of you still not sure, look what you could be missing… 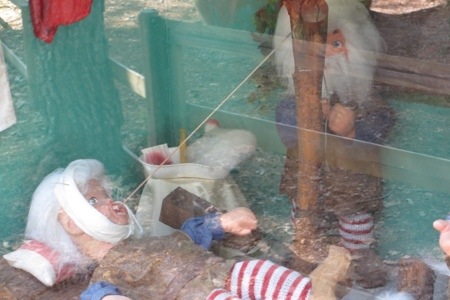